This is the Timeline of Events as They Unfolded 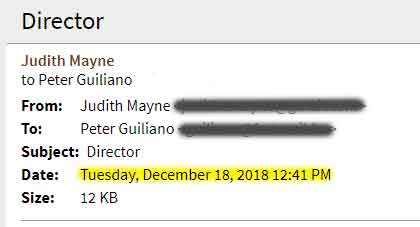 Newsflash!  Frank Brock emailed Rinpoche recently to offer service (unrelated to TI), and what eventuated from that is that Rinpoche checked from his own side and advises that Peter Guiliani comes out very good as new director – with Frank Brock as assistant director.

At First, the EC Accepted —but, Without Warning or Discussion— they Later Removed Rinpoche’s Nominations

20 December 2018: An email from the TI Office said, “Peter is the new Director” and outlined how I should go to the bank and sign the relevant papers. I think a general announcement was also made of the appointment. So initially, the EC seemed happy with Rinpoche’s recommendation.

24 December 2018: I sent out this one page document on my plans for the future of TI. It says:

You may already have heard the news that Judy has finally been able to wriggle out of the Director’s seat after her amazing stint of 10 years or so. Even then it has taken about a year to find a replacement. And even then… it took two people to replace her! Frank Brock and I will be taking over the reins from the start of 2019. Frank will be Assistant and I will be the CD. I will attempt to follow the advice of Lama Yeshe who founded Tara Institute in the mid 1970s; Think Big, Communicate, Be Professional.

8 January 2019: The outgoing CD, Judy Mayne, briefed Frank and me with this document, dated January —titled “Presentation to Incoming Director“.

Behind the Scenes, Something Unstated Happened During This Week Because Everything Changed From Here Onwards

Gabrielle Wallace was Judy’s Assistant and by this time, was in India on holidays. Although I had had a long meeting with the outgoing CD, Gabe was the only member of the EC that I had not had a meeting with at that stage. She and I attended the 1973 Kopan Course together and have been friends for about 50 years. I rarely use Facebook so I didn’t see Gabe’s post until much later in the month. Note that she made this post the day after Judy handed over to Frank, Gil and me and 3 days before Mark tells us that the EC has somehow fired Frank and me. At this stage, Gabe knows about “a few problems at TI” but Frank and I do not have any idea until 3 days later. “Maybe you should take advise re GD not to be director.”

It’s worth noting that I had only one vote (plus a casting vote if needed), Frank had one vote and the rest of the EC had 5 votes. So even if Frank voted with me, against his better judgment, the rest outvoted us 5 to 2. What was their overwhelming concern that made it imperative to dismiss us? This emergency has never been articulated.

12 January 2019: After giving us a briefing on the Centre’s finances, the Treasurer informed Frank, Gil Richards and myself without explanation that the EC had decided that Frank and I would no longer be accepted in our leadership roles even though at that stage we were on the EC. If a legally constituted EC has this power, it is not stated in the Rules. However, Frank and I had not attended a meeting of the EC that decided this and no Minutes could be produced to legitimise this decision. It appeared our Centre had been taken over by the other members of the EC. This appears to be an abrogation of legal process and a rejection of Rinpoche’s advice –  the basis on which the FPMT is built. Surely a very compelling and substantiated reason is needed not to follow Rinpoche’s advice.

17 January 2019: The EC claimed that FPMT International Office had revoked my “candidacy” as Director. There is no power to do so in the Affiliate Agreement: more here. On top of that fact, that claim raises several doubts. Firstly, International Office does not have a direct role in the appointment of Centre Directors. Then, the appointment was made by the TI EC —in accordance with Rule 47 (2)— not by FPMT, so the EC should have Minutes of their vote to dismiss us. However, we have never been shown any Minutes.

Although previously agreeing with Frank, Gil Richards and me to hold a formal meeting in which to Minute a vote to dismiss Frank and Peter,  TI EC subsequently engineered a different Motion:

Amended Motion: The Tara Institute Executive Committee endorses the decision by FPMT Inc to revoke the candidacy and offer of roles of Centre Director and Assistant Centre Director to Peter Guiliano and Frank Brock.

The “revocation by FPMT Inc” was a surprise because no notification or warning was provided and FPMT had not in fact made the original appointment — it was correctly made by the TI Executive Committee and should have been dealt with only by them. R”evoke the candidacy and offer of roles” is strange terminology for people who were, by that date, already appointed by the TI EC.
The reasons given in the report were simply bald claims with no specifics and no right of reply:

1. Unwillingness to work within FPMT policy regarding the management structure and
2. Endeavouring to divide the TI community, instead of promoting harmony and togetherness

1. Frank and I have decades of FPMT loyalty, so what was the basis for this claim?
2. Although much has been made of claims of division based on arguing our case later in the month that the rump EC acted wrongly at this early point of the month, where is the simple logic? The reason they fired us was because we would later protest about it. “We shot you in the leg because you were going to complain about being shot it the leg.”
They all agreed to mislead TI members
According to Mark’s email to Claire in Central Office, and with no apparent questioning or objection from her or anyone on the EC, this is what was written:

Planning and agreeing to tell a known untruth to “promote harmony” is not a Dharma action is it?

21 January 2019: I sent a direct email to Gabe, titled: “Please can we end the disharmony“. You can read it here and make your own assessment.

CEO of FPMT asks the EC to meet with Frank and me, “again”

22 January 2019: To help overcome the impasse between the EC and Frank and myself, Ven Roger Kunsang, Rinpoche’s long-time attendant and CEO of the FPMT, sent me an email saying he asked the EC to meet me to solve the issue adding that change needs to happen:

“I have asked that TI Exec etc to meet again [sic] with you to try and sort this out
as there may have been some big karmic obstacle in this initial stage.

With everyone wanting the best for TI … surely this can be talked thru in
a reasonable manner for the benefit of everyone.
I think you [made] ma[n]y good points and change does need to happen.”

Disappointingly, all attempts to discuss this with the EC were ignored as were requests for mediation. They twice rejected conducting a simple poll of the Members.

24 January 2019: Following calls to the TI Office from concerned students, the EC sent Members an email stating that “Peter Guiliano and Frank Brock will not be taking up the roles of Centre Director and Assistant Centre Director”. This was deceptive because by that date, we had been in those roles for at least 16 days. The email avoided saying we had been removed or fired. No reasons were given for the decision. This was perhaps the first time that members of the TI community became aware that something big was happening behind the scenes.

24 January 2019: The angry email I wrote to the EC in response. Could not be the reason for dismissal because it was written after the dismissal itself.

1 February 2019: The TI EC sent an email to Members stating why they sacked the new leadership team. The main issues they claimed were my proposed governance improvements (explained here) and my attempts to divide the TI community but they provided no expansion of the claims, no events, no evidence, no facts. And gave me no right of reply.

7 February 2019: I wrote this apology to Mark Fernandes. And one to Gabe. No reply from either person.

9 February 2019: Many TI people were upset and asked what was going on after seeing the first (24 January) broadcast “not be taking up the roles” email from the EC, I sent out this email to those I could contact. I did not have the list of Members used by the EC.

11 February 2019: After resisting calls to call a public meeting (I do not like the idea of a public fight), Frank and I did agree to hold a mediated meeting with the EC on the following Monday. A professional mediator and long-time TI member began to prepare for that meeting, making several phone calls.

13 February 2019: Gabe rang me to say she no longer wanted the mediated meeting to go ahead. In its place, she said that if I agreed not to mention my idea (of having a board) for one year, and I also made a formal apology to the EC, she felt she could talk the EC into accepting Frank and me back onto the EC. I asked for a few days to consider before making a decision. Then Gabe announced that three new people were being appointed to the EC at that same meeting Frank and I would be fronting the EC. That news alarmed me for several reasons. The EC had preemptively increased the vote against us from 5 > 8. But more concerning was the fact that they were not our appointments. Frank and I were not consulted and it was an unhelpful move that would only make the impasse more difficult to resolve. And according to the Rules, only casual vacancies can be filled between AGMs; these were not Casual Vacancies. Gabe would not agree to hold off on those appointments so I declined the offer.

13 February 2019: That night Venerable Roger Kunsang Skyped me from Nepal when I was able to report on the failure of our negotiations with the EC. He told me not to worry because Rinpoche believed that the changes at TI were underway.

15 February 2019: Frank and I agreed that we could not work with the current EC and so I sent out the email titled “Keeping Lama Yeshe Alive” notifying the community of our decision.

Widespread non-adherence to the Rules> According to the Rules that govern TI, the Annual General Meeting has to be held before June.
The EC has called this year’s AGM for the 4th of May but in the run-up to the AGM, the EC has claimed significant deadlines, etc that are in fact not what is stated in the actual Rules. In other words, the Rules say one thing and the EC says another.

AGM Information for Members: on the TI Website they run more misrepresentations that ignore what is said in the Rule.

For many years, in accepting new Members, the EC has not followed the required method contained in the Rules. I wrote this letter to the Secretary asking 8 questions and quoting the Rules that are ignored.

This is his reply. He answers none of the questions and relies on “good faith” as the sufficient reason for ignoring the Rules.